I think Shepherd’s Pie is one of the ultimate comfort foods. It reminds me of my childhood and especially church potlucks. The mashed potatoes were of course the best part, right?

I’ve tried a few paleo versions of Shepherd’s Pie and finally tweaked enough until I’ve got one that I’ll stick with. The main difference for me is in preparing the mashed cauliflower (faux mashed potatoes). Most recipes call for you to steam the cauliflower before mashing it, but I always find that this makes mine too runny and not close enough to the texture of real mashed potatoes. This time I tried roasting the cauliflower instead and the texture was perfect!

My little guy was shoving this into his mouth by the messy handful and Charley managed to swallow five bites, so I am definitely considering this a picky toddler approved recipe. (She did, however, refer to it as the Pie of Bravery, and suggested that maybe next time I should call Nana and ask for her recipe).

-salt and pepper to taste

2) Throw in your onions, garlic, carrots and broccoli and fry for approximately 5 mins or until they begin to soften.

3) Crumble your meat into the pan, season with salt and pepper, and cook for 5-10 minutes or until browned and cooked through. (My pan isn’t very large, so I actually had to scoop out some of the vegetables to make enough space for the meat to cook evenly. Once the meat was cooked through, I add the vegetables back in).

4) While the meat is cooking, preheat your oven to 400 degrees. Chop or slice your cauliflower (I slice the cauliflower into about 1 cm thickness so it will roast faster) and spread it on a baking sheet lined with parchment paper and olive oil or coconut oil. Sprinkle with salt and pepper. For a little extra kick you could sprinkle with some minced garlic as well.  Roast at 400 degrees for approximately 25 minutes or until the cauliflower just begins to brown. Remove when roasted but leave the oven set at 400 degrees.

5) Once the meat is cooked through and is no longer pink, add your beef broth, tomato paste, coconut aminos, rosemary, thyme and 1tsp of paprika. Taste and add salt if necessary.

6) Bring the mixture to a boil and then let it simmer while some of the excess liquid dissolves and the flavours meld.

7) While the meat and vegetables are simmering, puree your roasted cauliflower in your food processor, Vitamix, or blender. I did not need to add any liquid to mine, but if it seems to dry then add some bone broth, water, or coconut milk, just a tablespoon at a time. I prefer it on the dry, fluffy side.

8) Remove your meat and vegetable mixture from the pan and press it into a 9×11 baking dish. Spread the mashed cauliflower on top, and sprinkle with the remaining 1/2 tsp of paprika.

9) Bake it for about 25 minutes or until the top is nice and browned. Enjoy!

*This recipe is paleo and Whole30 approved. 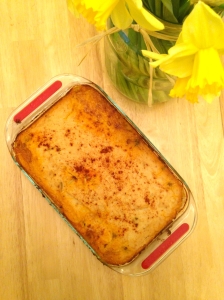